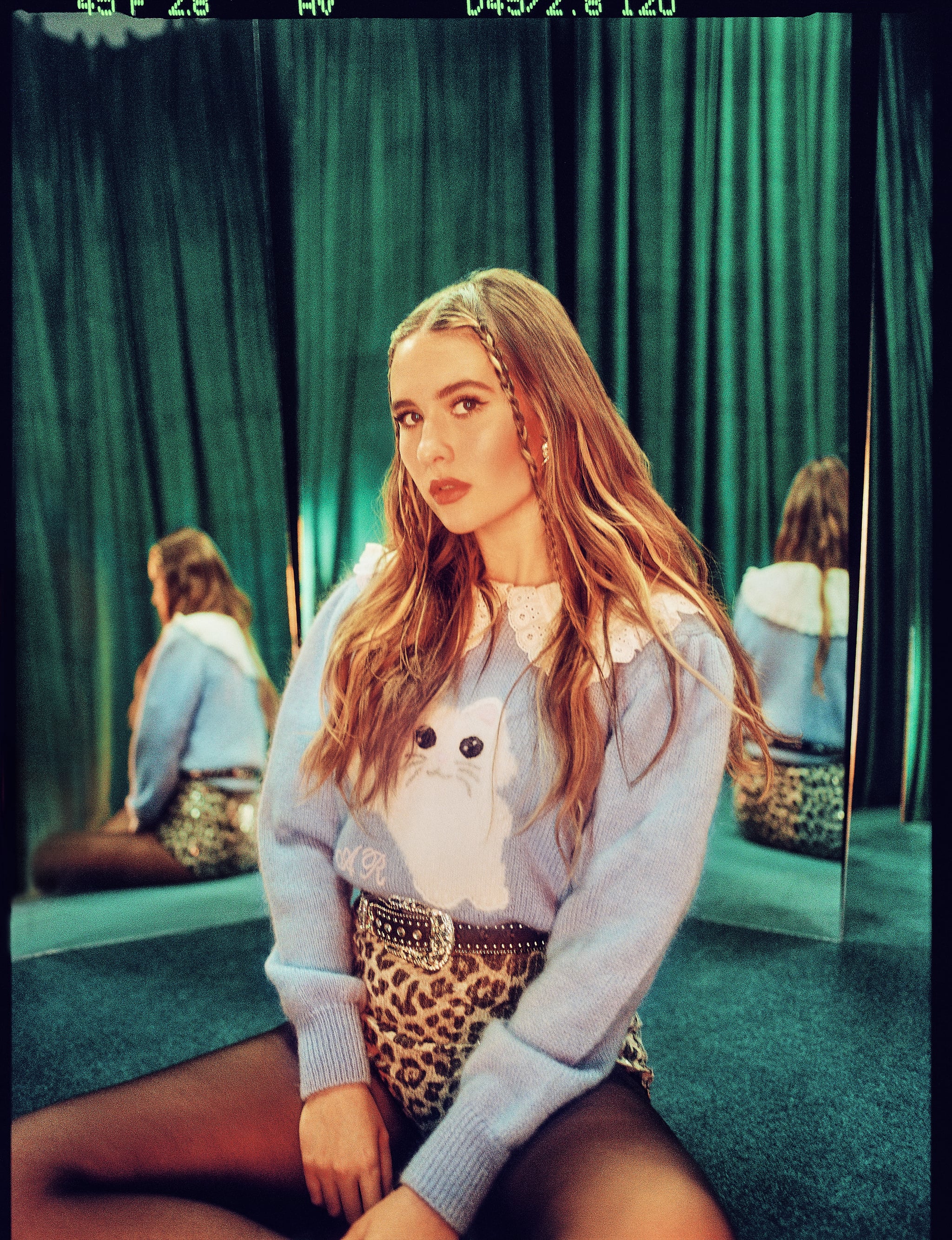 Mimi Webb is a name you’ll soon be familiar with, if you’re not already. After kick-starting her career through TikTok videos, the singer has since performed at Reading & Leeds festival, BBC Radio 1’s Out Out Live, and had her first appearance in the BBC Radio 1 Live Lounge. Today is the day of Webb’s debut EP release, Seven Shades of Heartbreak, and we caught up with her to find out everything there is to know – from musical influences and TikTok, to fashion inspiration and future plans.

POPSUGAR: Tell us a little bit about how you got into the industry. Mimi Webb: I started when I was about 17. I dropped this drum and bass song with a DJ, and I had top-lined it, wrote over it, and just put my vocal on top. Then we were like, “Let’s just release it on Spotify — see what happens.” The one thing I really wanted was just for someone to listen to my voice and be like, “OK, right. Here’s some people you can work with just to network.” My manager ended up finding me through the song on Spotify. He worked at Sony [at the time] and invited me to the office to speak about what I wanted to do. It all started from there, and I was in and out of loads of studio sessions. It was exactly how I wanted it to go.

PS: Sounds exciting! Is there a moment that stands out as the beginning of things changing for you?
MW: I definitely would say “Good Without”. When we released that song this year, that was the one that really got things going. It was right at the end [of the pandemic] that I released it. That was the eye-opener, and it just went really well from all my TikTok videos and being at home. It was amazing to see how the song had done, after being stuck at home and then coming out of lockdown into the real world and just seeing everything change.

PS: When you first started making TikTok videos, was there a part of you that imagined what it would be like now?
MW: No! I was freaking out. I was like, “Come on, I want to try it, see what it does.” I was saying to my mum and dad, “I want to really try this out,” and we just kind of went for it, and I didn’t really know what would happen. I’d seen that TikTok could do amazing things for songs, because it had really blown up a lot of songs, like “You Broke Me First” by Tate McRae, that was one of my favourite songs. When I started, I couldn’t really get my head around it, because you just see all these numbers, and you can’t actually figure out what it is until you then see the growth the song makes outside of the app.

PS: Your friends and family make appearances in a lot of your TikTok videos. How difficult was it to convince them to get involved?
MW: They were really up for it! I think because I don’t really play them anything, and I don’t like to tell them too much. I’ve always been a bit like that, I think because I moved away at a young age, and I was kind of on my own for a while. For them to even get a scoop of what’s going on and to be let into the secret, they were like, “Yes, well, whatever way, we want to do it.” I never really played them anything, and I always kept it all to myself, because I just wanted to wait for the right moment.

PS: I’m sure they loved that. What do you think it is about TikTok that has been so helpful for young artists?
MW: It’s very welcoming, and everyone wants to hear new music on the app. I think it’s a really creative app, and there’s not any judgment on what you do, because there’s so many different things people can do. TikTok isn’t for just one thing — it’s for so many different things. That’s what I love about it. People do dances, singing, songwriting, jokes, comedy — all those kind of things. It’s definitely the best place to go when you’re a new or upcoming artist, and it really helps you connect with the fans.

PS: Speaking of new music, your first EP is out today! How are you feeling, and what can you tell us about it?
MW: I’m so excited. It’s really about clarifying my sound now and making that really dominant and really understandable. It’s about a situation that I’m going through and I’ve been through, and it’s something everyone can relate to. It’s got lots of different chapters of that one situation in it.

PS: How would you describe your sound for people who haven’t heard you before?
MW: Definitely the emotional ballad, powerhouse sing-your-heart out songs. I love the instrumentation we use and the production, sonically; it’s got that pop feel as well. It’s definitely got the mix between pop and then ballad.

PS: When writing the EP, was there anyone you were particularly inspired by or listening to at the time?
MW: I’m always listening to Adele, and I think she’s always been a really big influence and inspiration for me throughout my years of writing. I also love Lewis Capaldi. I definitely took some inspiration from his album and the emotional songs out there. 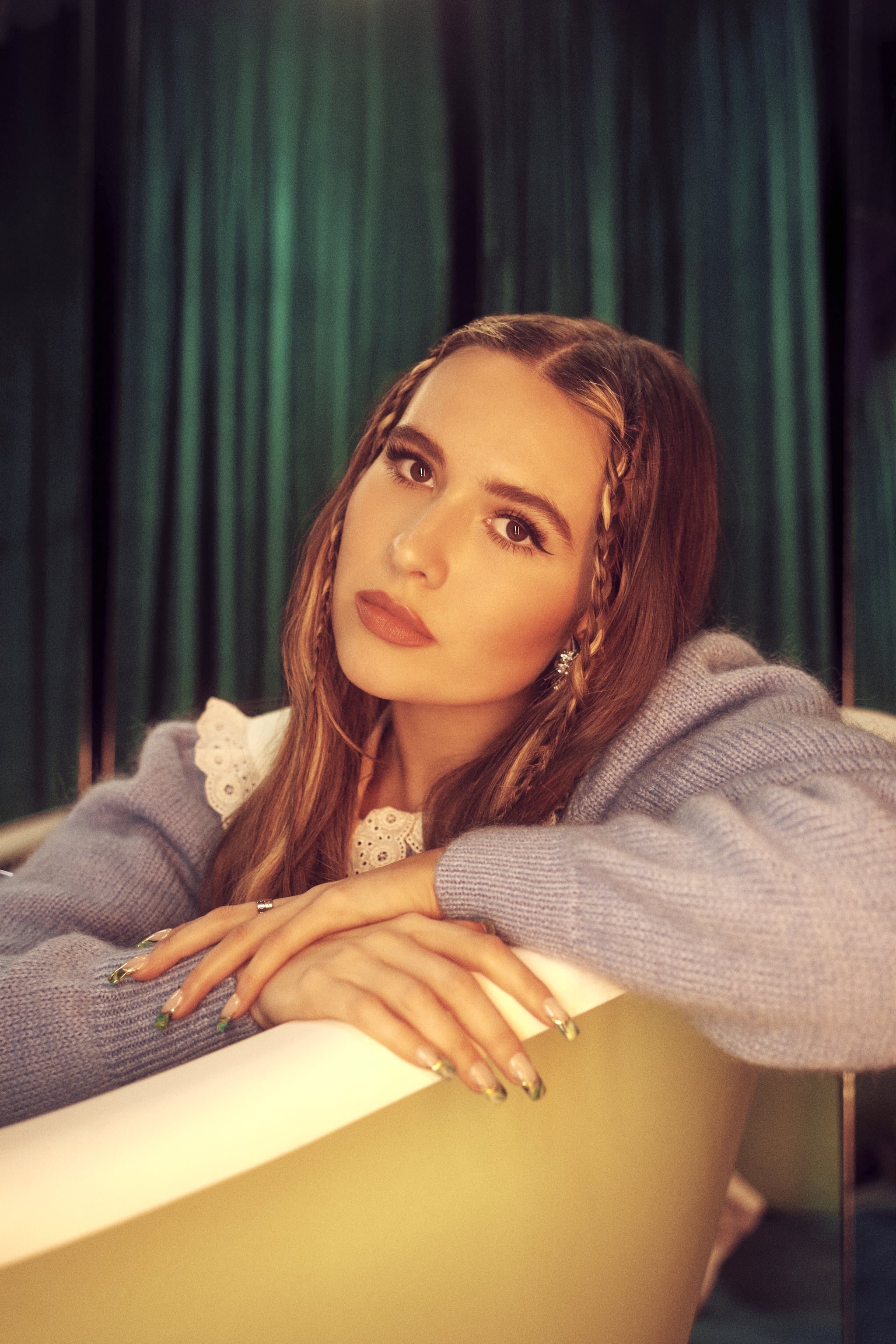 PS: Let’s talk about your style, where do you get your fashion inspiration from?
MW: I’m really inspired by Dua Lipa. I love her fashion and her stylist, Lorenzo; I’m obsessed with him. I love everything he puts her in. She really is just my inspiration; and Bella Hadid as well has an absolutely incredible style.

PS: How important is what you’re wearing when you’re doing a big performance?
MW: It’s definitely one of the first things you start thinking about. It gives you confidence on stage, and it really helps you get into the moment. To be able to sell the songs, feeling good in your outfit and feeling confident in general is a big part of that. You want to look like a pop star — you want to give the full vibe to people.

PS: You recently did your first ever Live Lounge for BBC Radio 1, and you mentioned that it was something you’d always wanted to do. What are some of your other goals?
MW: I’ve always wanted to do the James Bond theme song. That would be incredible — to be able to do the main leading song in the movie would just be a dream come true. With someone like Adele to have done it and Sam Smith, it’s just so incredible and that would be amazing.

PS: Finally, if you had any advice that you could give to your younger self, knowing what you know now and what you’ve been through, what would you say?
MW: I’d say be patient, but not just in terms of waiting, but more like just enjoy it. Take every day as it comes, and experience it and soak it all up. When you really want something and you’re just waiting around and you’re just forcing yourself to wait, you’re not actually enjoying those days. Enjoy every day of it, put your all into it, and just make it your number-one priority.

The Best Post Workout Routines You Should Totally Do –

How to look after your body after a workout –